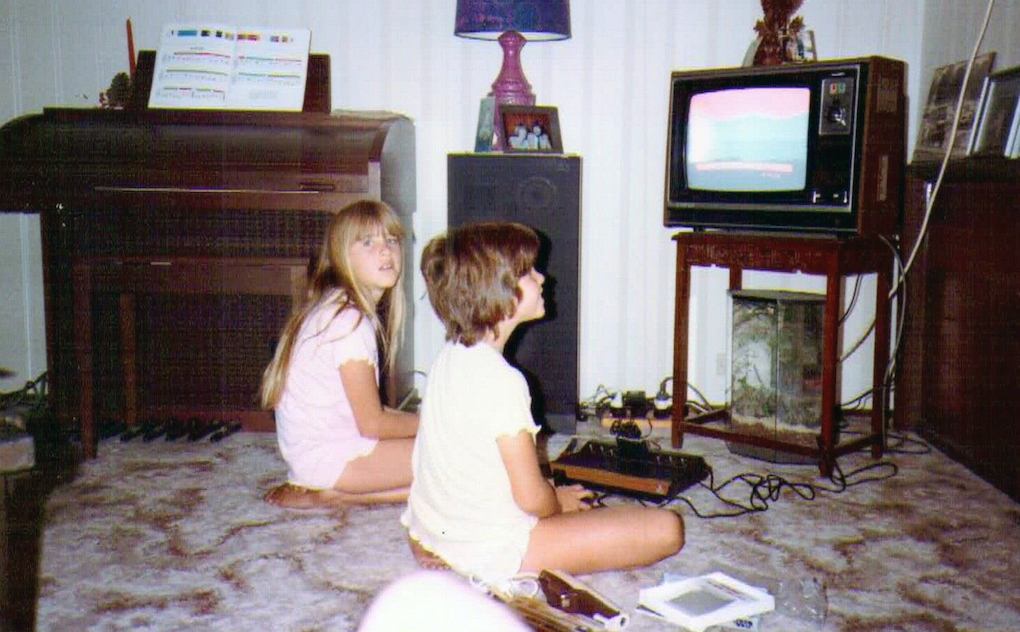 a story of the transience of game industries

It was hard to miss, but eventually everyone has to admit the establishment of a new medium – video games. After several years as the fastest growing sector in the entertainment industry, the video game industry as the youngest of those, starting sometime in the beginning of the 1970s, became the biggest sales market of mass media over the past several years and so embedded itself as one of the major media in our cultural everyday life.

Certainly it is positive to see that video games are more and more socially reflected as cultural artefacts, which can be seen in the occurrence of genre limits widening manifestations like so called serious games in arts sections of our accepted newspapers. For example the quite newest outcome of this genre, This War of Mine, with its consciously frustrating held gameplay to winningly show the tremendous personal consequences of war. Additionally, no less than the permanent exhibition of video games at MoMA established the cultural rise of video games next to their mentioned expanding in popular culture.

Nevertheless, obvious capitalistic characteristics will always determine social consequences. From a perspective of cultural studies the term culture industry from Horkheimer and Adorno’s Dialectic of Enlightenment is representative of a critical analysis of those developments. Altough developed in the 1940s to describe the industrialisation of culture, the term has also been used to analyse a variety of influences of capitalistic structures to cultural products. Following Aphra Kerr’s statements, I assume that also the quite young game industry can be conceptualised as a cultural industry. This implies the possibility of a transfer to the focus on video games, while similar tendencies within the recent developments can be examined to help understand reappearing patterns.

Therefore, purely following Adorno and Horkheimer’s ideas, video games as a recent form of mass media are under conflict with a traditional definition of culture. Basically, there are two major interests, which never seem to be compensable. On one side, there is the straight artistic expression representing a fundamental base of creating culture, which should be a way of criticising everyday life, political and economical systems. On the other side, we find the consequent constraint of covering the expenses or mostly continued ideas of a professional industry with commercial business logics, as it is described with a variety of business models in this paper. This constitutes risks of a homogenous and ideological culture production, which could be summarised in the sense of the notion of Marxist false consciousness.

Because of similarities in terms of a highly technical and pricy production, we could find related patterns in those conflicting interests within the developments of the film industry. In the beginning, limited within technical and financial boundaries, the movie industry developed a great amount of techniques and methods during its years of creative progression. Nowadays the commercially dominating studios are producing less, but blockbuster movies with budgets above several hundreds of millions of dollars and even small independent projects are in the range of a few million dollars. Since the game industry surpassed the Hollywood box offices in revenues in 2004, there should be at least similar tendencies within game industries.

Therefore, an analysis of the yearly output of this industry since the first commercial release of games in 1971 was conducted. The underlying dataset is a crowd-sourced list of potentially every video game ever made until 2013 and was complemented with data scraped by myself with games missing from 2014. That is why no guarantee can be given for its completeness. Additionally, the most expensive games, according to a Wikipedia-list, are plotted on the time scale and are represented by circles, whereby the games are color coded according to whether they belong to a game series or not.

What we can see out of this arrangement is that after a quantitative rise of games until the climax in 2008, with almost 2,000 published games, there is a decrease until lasts year's amount of just around 500 games. This has several reasons, including the occurrence of mobile games, which are not included in that dataset, as well as newer distribution models, for example freemium or social games that tend to a certain longevity. Certainly as shown in the graph there is a pattern according to the amount of pricy games, so called AAA-games, comparable to blockbuster movies.

So I would deduce that in times within that accumulation, it is financially risky to concentrate on creative or experimental approaches. Thus whether a big amount of marketing costs is spent to create and introduce a new franchise, like it was done with Destiny, or one simply relies on an established game series, which is the most common path to commercial success but also the irreversible decision against artistic freedom and diversity.

Following that assumption, another visualisation was created based on the idea of a recurring game series. It shows a self-curated dataset of every video game series with at least three games released. It is based on the same crowd-sourced list and there is again no guarantee for completeness. An ordering of the amount of released games within those series creates a pattern and makes it possible to comprehend the most exhausted series. The calculated average starting time period of all series' is from 1995 to 1996, which reproduces a qualitative analysis of the origin of game innovation by Ron Duwell and justifies his term age of refinement.

This portrays that today the most games we play are a replicate from an idea that is on an average about 20 years old. A quote from Adorno and Horkheimer sums up this phenomena:

“Culture today is infecting everything with sameness.”

Furthermore to clarify that statement, three of the most expensive game series', particularly Call of Duty, Grand Theft Auto, and Final Fantasy, as defined in the first visualisation, are deconstructed into the visual artefacts of gameplay screenshots of every major game released within this series to show the repetitive subjects. All three game series' are considered to be pop-cultural phenomena.

Next to Adorno and Horkheimer, there was another significant theorist who had his focus on mass culture, namely the poststructuralist, Roland Barthes. With his book, Mythologies, he expanded the concept of myths to analyse modern myths of everyday life, for example coded embassies of the mass culture phenomena. Contrarily to Adorno and Horkheimer, he affiliates those phenomena not to a capitalistic criticism, but to a semiotic analysis of signs. Following his theory that a game franchise is mythically loaded, the basic functionalities and commercial ideologies disappear into a natural presence. So our mystified game franchises are not just simple video games anymore, but transcendental and desirable artefacts. To highlight this pop-cultural mechanism the following series try to demystify the three most successful franchises. 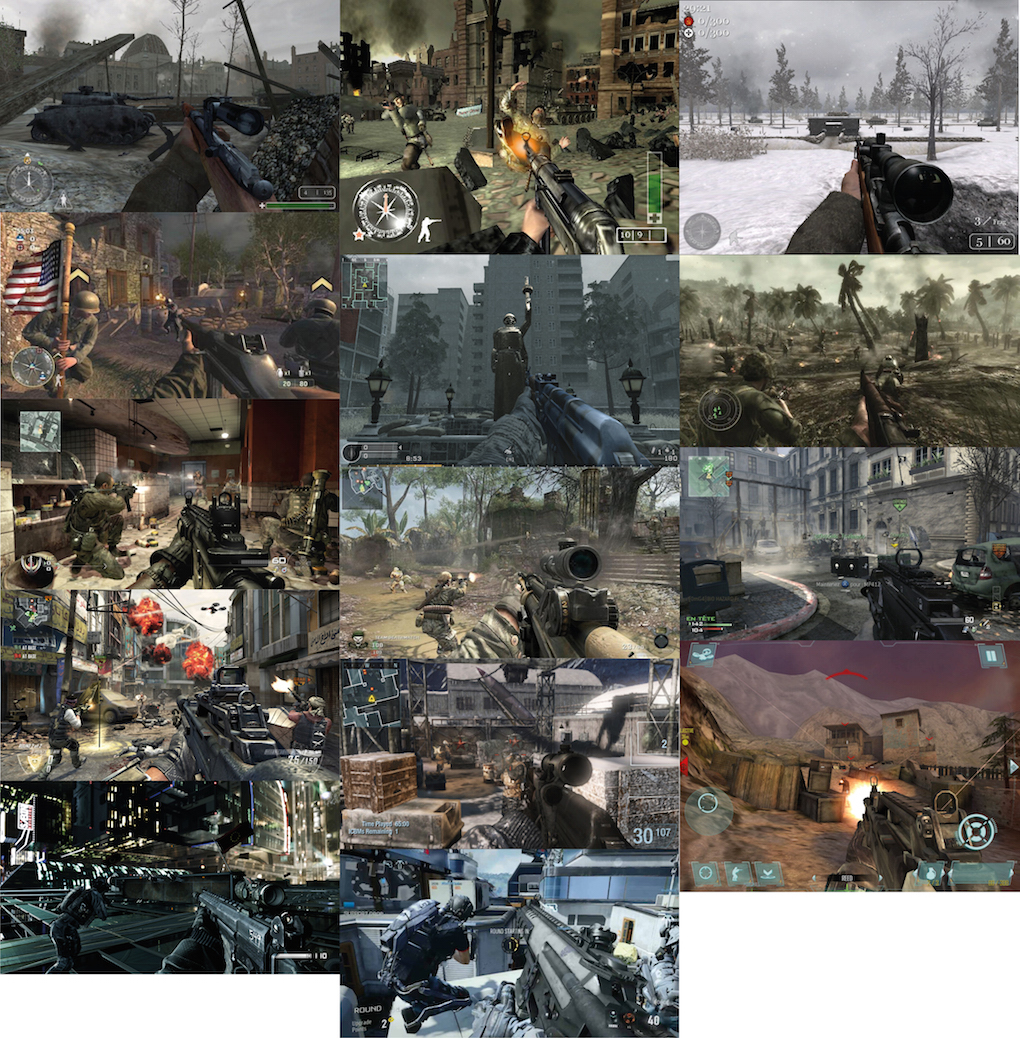 Call of Duty is a relatively young first-person-shooter franchise, which is set in various world war scenarios ranging from World War II to near-future-settings lately. Remarkable is the rotative development of two or more studios to keep a yearly publishing rotation and thus a maximum usage of the brand. It is also known for the relatively short, but action-overloaded single-player campaign, which is almost comparable to an interactive version of blockbuster-movies. Consequently Kevin Spacey has a lead role in the latest game, which shows the upcoming cinematical approach of games. 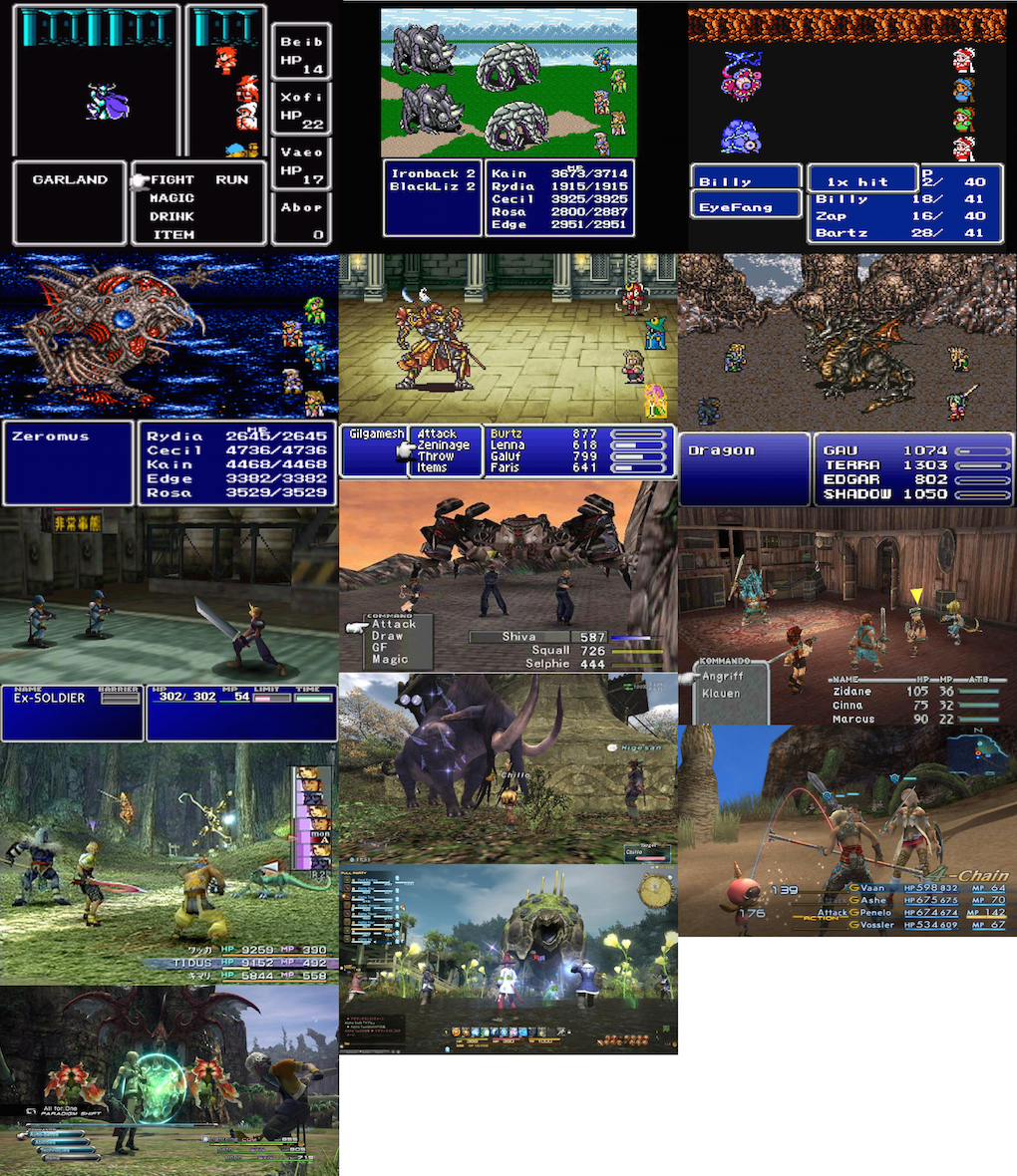 Final Fantasy has its origins in the late 1980s and in this way it was able to address a commercially valuable target group, the so called Nintendo generation, from the outset. It is representative of the second regional hub for game development next to the USA – Japan. The role-playing game series cleverly combines Western and Asian styles in their character design. Thus a huge audience is addressed, so that the brand has expanded worldwide and offers along with the main game series, literature and movies. 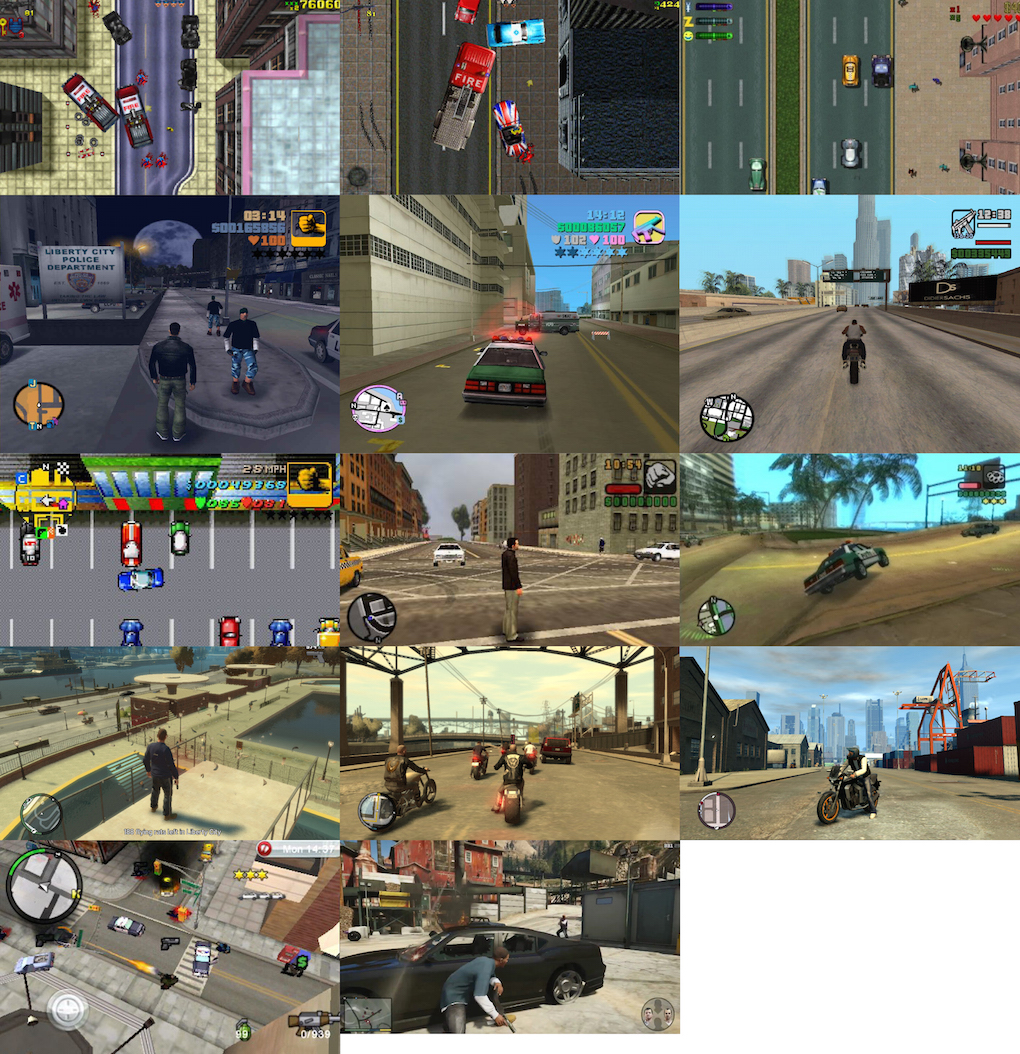 Grand Theft Auto is a typical representative of a series that started in the 1990s within the claimed age of refinement. The series is based on an open world experience, which evolved especially after the technical shift to a 3D environment with GTA III. The games are always very cynical representations of society and pop-culture within the relevant area and period. Ironically, through the commercial success the series became a pop-myth by itself. The series with its self-reflective approach is a perfect example for a certain kind of remix culture and, in the end, postmodern games.

After all remarks, we see that video game culture is heavily influenced by certain capitalistic systems. Games are developed to be profitable and, consequently, to match a largest possible mass. In the end, we always play the same old ideas that are getting more approachable and easily digestible from year to year. We can manifest a homogenisation of popular taste, but it is also important to recognise the vicious circle that is described in Dialectic of Enlightenment. Therefore, we can criticise the big game publisher for being unprogressive and greedy of money. It is a small elite that defines what culture is and grounded in their intentions, reduce culture to a product without depth. So we can state a cooptation of consumers to a uncritical mass.

Otherwise such companies are grounded on capitalistic concepts, so they are not badly intentioned per se. Capitalism is a regime that tries to commercialise everything. So it will try to offer what people want, what is catchy and comfortable to live with. In the end we destroy innovation by ourselves. We are an active part of this circle and we are as responsible as the big companies are. All in all we have to break the circle. We have to understand that every purchase is an approval to certain ideas, circumstances and organisations.

In contrast to Adorno and Horkheimer there a more recent discussions within culture studies that don’t see pop-culture as pure ideology. Furthermore pop-culture has chances in itself, a subversive moment, following for example texts from Walter Benjamin. We have to remember that the game industry itself is a subcultural industry with hardcore subcultural roots, as Mikolaj Dymek states. What happened within the last years was like a casual revolution, a shift of the target audience.

There are some developments like the growing indie scene that are remembering their roots. They are building games with gameplay elements and styles from the past, like the very difficult, Super Meat Boy. Because budget is limited, they can totally focus on conceptual aspects. They also have platforms to unite against the big publishers, for example, Steam, with almost an oversupply of indie games. And with Minecraft from Markus Persson there is also the obligatory success story as the most popular indie game with 18.7 million sold pc-copies. Nevertheless capitalism can always strike back, so Microsoft bought the game in September 2014 for 1.9 billion euro, which is worth considering.

In conclusion, by the use of visualisations and a theory based reflection one was able to uncover specific cultural phenomena of the game industry, that also occurred within other entertainment industries. Now it is for us to draw the right conclusions. You can choose whatever type of game you want. Your buying is either a decision for a technological progression of always the same old idea – that Mario can rescue Peach again for the next 31 years, or for a new critical expression – innovative formats and maybe people that are not white, male and develop your game in Northern America. Eventually, it is important to recognise that culture is nothing prescribed, so questioning and defining culture by yourself is crucial. 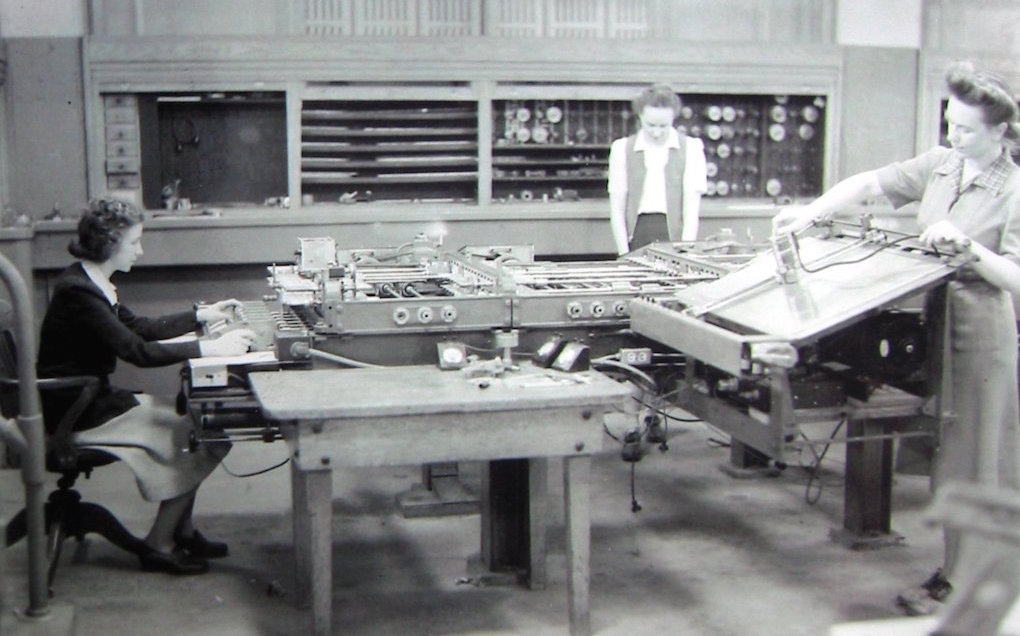 This website was created within a datajournalism course
at the University of Applied Sciences Potsdam.